A big part of our Lynch family’s fascination with Japan is its unique wabi-sabi aesthetic. Despite the outside perception of Japan being an almost perfect and technologically advanced nation, the country’s enduring philosophy of wabi-sabi is all about appreciating the beauty of imperfection. Wabi-sabi is a Japanese worldview and state of mind emphasizing simplicity and purity – the beauty and awe of all things humble, imperfect, and unpretentious (a beautiful sunrise, the still morning frost, a graceful Japanese tea ceremony). The critical thing is savoring life’s simple daily pleasures. A longtime Japanese friend has described this philosophy to me as a sort of hopeful sadness that recognizes that nothing is perfect, nothing lasts, nothing is ever finished. Japan’s reigning organizing and tidying guru, Marie Kondo, has succinctly described Wabi-sabi as “experiencing beauty in simplicity and calmness”.

The essence of wabi-sabi embodies the fundamentals of Zen Buddhism, emphasizing intuitive insight over deliberate intellectual conception. This Japanese life view perhaps contributes to the country’s deep sense of egalitarianism, with one seeing few outward signs of pretentious wealth here. While this philosophy can be found throughout the world and in everyday life, the tea ceremony and yearly sakura season fully embody the spirit of wabi-sabi.

Though many of us in the West consider ideas of beauty based on the concepts of perfection, exactness, and symmetry, the Wabi-sabi perception of beauty recognizes the value of imperfections, especially as manifested in nature. The ephemeral, impermanent features of the natural world reflect the essence of grace and authenticity.

Sakura does not just mean love and renewal, but also evanescence and the fleeting nature of existence. “The Japanese are implanted with sakura as a symbol not only of the season but of ourselves,” says Mariko Bando, author and chancellor of Showa Women’s University in Tokyo. “The blossom is beautiful but it goes away. Our lives are not eternal.”

When the poet and Buddhist monk Saigyo Hoshi wrote these lines in the 12th century about the wild cherries of Mount Yoshino, he captured a characteristic Japanese sakura emotion. The blossom’s budding, its ripening to bloom, and its final fall, has long symbolized the cycle of life and death. In 1989, the author and diplomat Inazo Nitobe contrasted the cherry with the thorned English rose, calling it “our flower, which carries no dagger or poison under its beauty, which is ever ready to depart life”.

Sakura was a fertility ritual in ancient Japan, with farmers climbing mountains to observe the arrival of blossom on cherry trees, which they took as a signal to plant rice seedlings. They believed the petals embodies the deity of rice paddies, who would bring a good crop “Farmers throughout the blossoms would fly down to villages and protect the rice,” says Naoko Abe. By the 19th century, scholars claimed the cherry as quintessentially Japanese, a symbol of its independence from plum-loving China. The imperial family held the first hanami party for aristocrats in 812 AD, with the world hanami making its debut in The Tale of the Genji, an 11th-century story by a lady-in-waiting.

When visiting several of our favorite gardens in Kyoto, Tokyo, Nara, and Kamakura, we particularly enjoy the calming, beautiful sound of water drops originating from the scenery itself. This pleasant echo of the water drops’ sound, “Suikinkutsu” (literally “water koto cave”) evokes a calm, cleansing vibe that many of our Japanese friends feel is rooted in Japanese culture. The zither-like sound recalls the traditional instrument, “koto.” Also functioning as a draining ornamental device, “Suikinkutsu” is regarded as a fundamental masterpiece of Japanese landscape architecture.

The stone basin underneath the Suikinkutsu, known as “Chozubachi”, is where you cleanse your hands and mouth before a traditional tea ceremony. The water droplets fall through the gaps between the small stones, into the hole, and onto the surface of the water pooled at the base, creating the unique calming, almost sedative tones. 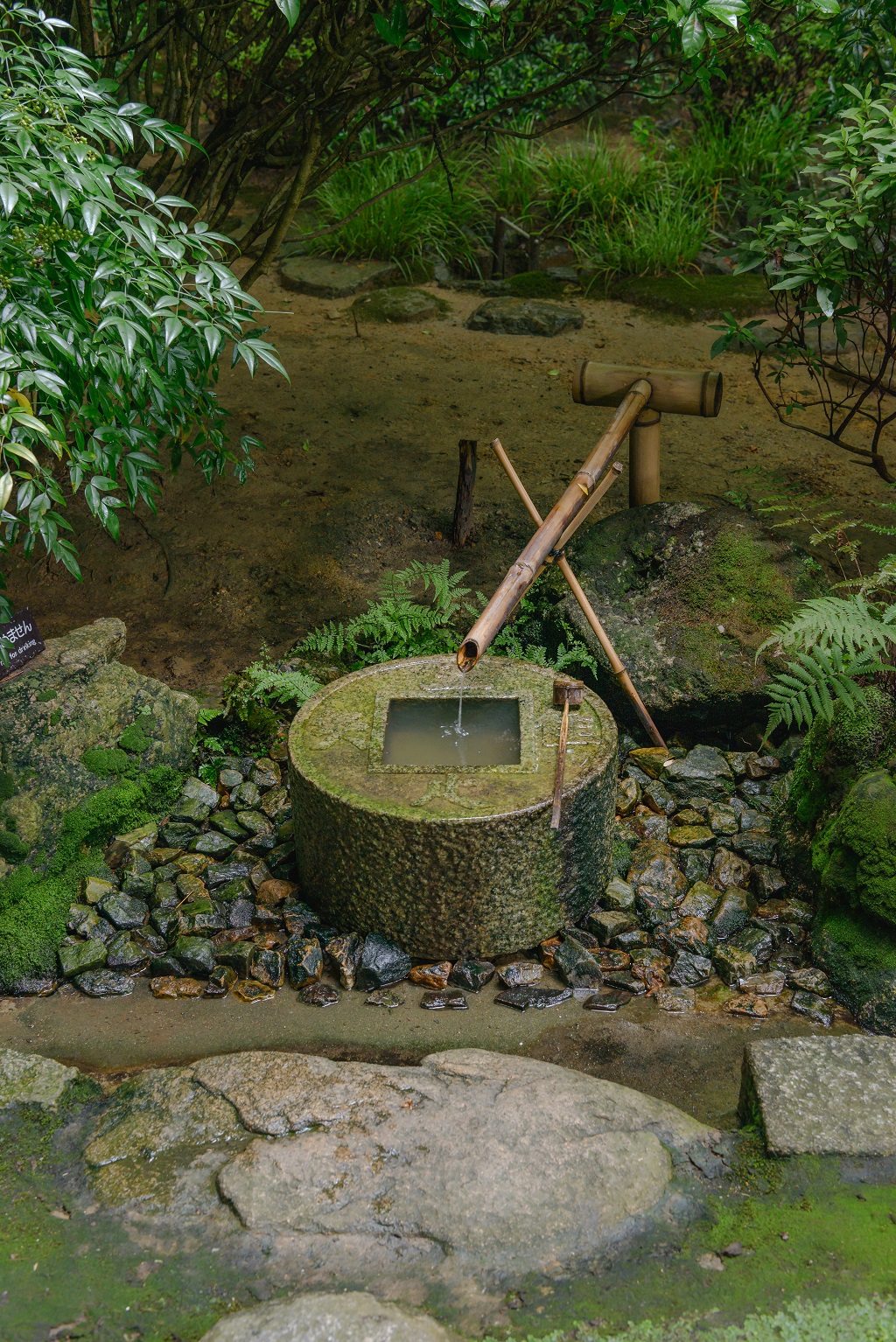 Another example of wabi-sabi in terms of humility and simplicity can be found carved into this basin. The kanji written on the surface of the stone seems insignificant when read alone. However, when each is read in combination with the central bowl, (ware tada o shiru) the rough translation is, “What one has is all one needs” or “I am content with what I lack”. The History of Japanese Tea Ceremonies

The Japanese Tea Ceremony may be an ideal illustration of a wabi-sabi activity. The imperfect items used in the ceremony include mismatched cups and utensils. This concept is loosely linked to other ceramic creations like “Kintsugi”, the art of preparing broken ceramics with a paste-like mixture of gold and lacquer. With Wabi sabi based on the idea that nothing is perfect from the start, “Kintsugi” emphasizes the repairs of the object, symbolizing the point that its history is a critical part of its beauty. Many of the Tea Masters we know in the Kyoto area fully believe one achieves enlightenment, peace of mind through the simple, everyday preparation of tea.

After Zen monks brought tea to Japan in the 13th century, it was first used at Zen monasteries. During the following decennia, tea became a popular commodity for the common people as well. Consequently, the first tea gatherings took shape, and betting games revolving around the blind tasting of tea became a fashionable pastime. In succession, shoin-tea gatherings held at the grand reception rooms in the mansions of the military elite laid the foundation for the further development of the rite of tea. Shogun Ashikaga Yoshimasa was a great proponent of this style. This is clear because he spent most of his waking hours in pursuit of the way of tea, appreciating the arts. He almost made it seem as if he had completely forgotten about his governmental responsibilities.

At the same time, Zen monk Murata Shukō of the Sōmyōji temple in Nara (who studied Zen meditation with Ikkyū zenshi) devoted his time to hosting sarei tea ceremonies in the way customary for Zen temples. Yoshimasa favored this way and commended the spreading of Shukō-style tea throughout the country. This branch of teaching produced many adepts of his way, and gradually the form in which the rite of tea was practiced began to transition from shoin-tea to wabi-tea. Our Favorite Tea Ceremony at Korin-in-Temple

Our Lynch family loved the experience of a private tea ceremony with our tea master Suzuki-san at Korin-in Temple in the Daitoku-ji area of Kyoto. This place is quite noteworthy for its number of Zen temples. Similar to other temples, Korin-in has a deep history, built in 1520 as a family temple. The abbot’s quarters in front of the rock garden was built in the Muromachi style. In contrast to neighboring Zuiho-in temple, Korin-in is only open during a few weeks of the year. The temple’s garden represents a part of China with mountains as azaleas and islands as rocks. The garden also has a tree used traditionally in India to create the pages of sacred books. Of special note are the temple’s “entrance with windows”, a classic feature of many famous Zen gardens.

Although this sounds ponderously taxing, a private tea ceremony is most interesting with the hour or so going by very quickly! Believed to be introduced to Japan by Buddhist monks in the late 12th century, powdered “matcha” green tea is considered the highest quality tea in all of Japan.

Wabi-Sabi in the World Today

From the tea ceremony to the 21st century, wabi-sabi continues to evolve. You may see wabi-sabi’s influence on international design as many artists and architects integrate clean, understated lines in their creations, such as Frank Loyd Wright and Mies van der Rohe. Frank Lloyd Wright was once quoted as saying, “At last I had found one country on Earth where simplicity is supreme”, in reference to Japan.

Perhaps unknowingly, Henry David Thoreau was a true practitioner of wabi-sabi stating: “Live each season as it passes; breathe the air; drink the drink; taste the fruit and resign yourself to the influence of each”.